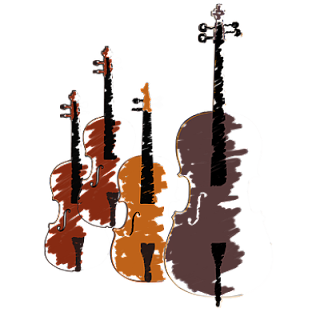 Refreshments following in the Narthex

Saint John’s Church is located at the corner of Hudson Street and South Broadway
The proceeds from this Benefit Concert support the
Stained Glass Restoration Fund
Tickets ($25 & $20 for students & seniors) may be purchased at the door
& through PayPal at yonkerschurch.org.

For more information, contact the Parish Office
914 963 3033 or parish@yonkerschurch.org

Praised as an “exceptional talent” by the Frankfurter Neue Presse, violinist Jessica Park captivates audiences from New York to Seoul with a diverse and compelling array of solo and chamber music performances. Equally at home on both modern and baroque violins, Ms. Park is in high demand as an interpreter of baroque, classical, and contemporary repertoire.

Juilliard School. As a baroque violinist she has performed with groups such as Apollo’s Fire and the Washington Bach Consort.Swiss violinist Chiara Fasani Stauffer enjoys playing music ranging from the Baroque to the twenty-first century and has had the privilege of performing across three continents. Since relocating to the US in 2012, Ms. Fasani co-founded Time Canvas, a trio performing chamber music and improvisation. In Cleveland she played with the chamber orchestra CityMusic Cleveland and the new music group FiveOne Experimental Orchestra. Most recently Ms. Fasani has been pursuing a second master’s degree in Historical Performance at The
JUDITH INSELL, VIOLA

As a Music Education Administrator, Ms. Insell is currently the Director of the School for Performing Arts at Bronx House and has previously held the positions of Director of Music Programs for Bronx Arts Ensemble, Director of Music at the Harlem School of the Arts and Assistant Director of Instrumental Studies at Mannes College, The New School for Music.
BEN LARSEN, CELLO

and provides the opportunity to work closely with composers of various generational and cultural backgrounds.  He has also performed alongside members of the Emerson, American, Chiara and Tokyo quartets, as wells as Daniel Epstein, Vicky Chow, Ian Rosenbaum, Eriko Sato and Linda Chesis. which is comprised of eight commissioned works by eight different composers for Flute-Cello duo.  The project promotes the genrePieces of Eight,Martha Cargo, and in the projects that he spearheads, working with some of today’s most notable composers, including Robert Sirota, Reena Esmail, Tania Leon, Ke-Chia Chen and many others.  In 2016, Larsen launched a project with flutist Concerts on the SlopeKnown for the energy he brings to his playing cellist Benjamin Larsen has forged a reputation as an avid chamber musician in the New York City area.  His knack for adventurous programming comes through in his work as Artistic Director of the series
Mr. Larsen is a graduate of Manhattan School of Music, where he was the recipient of the Hans and Klara Bauer Scholarship, as well as the 2011 Pablo Casals Award.  His past mentors have included Julia Lichten, David Finckel and Eric Dahlin, as well as lessons with Marta Istomin and Bonnie Hampton.  He spent a year playing with the band The Left Banke, and attended summer festivals including Pacific Music Festival, Norfolk Chamber Music Festival, Music@Menlo, and Castleman’s Quartet Program.  In addition to his busy performance schedule, he holds a private teaching studio in addition to faculty positions at Music School of Westchester, DZ Strad Violin Shop and Florentine Music School.  He plays on a 19th century anonymous cello.
Posted by St. John's Church, Getty Square at 2:43 PM