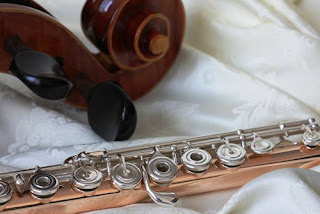 Julie Nah Kyung Lee, flute and Benjamin Larsen, cello.
Music by Dietterich, Esmail, Sirota, Bach, and Villa Lobos.
$20 suggested donation for the artists.
Flutist Julie Nah Kyung Lee actively shares her music throughout the United States and Asia. Born in South Korea and currently living in New York City, her recent performances include solo performances and chamber recitals, ranging from early to contemporary music. Lee received her Bachelor of Music degree from Manhattan School of Music where she is currently pursuing a Master of Music degree in Flute performance

Known for the energy he brings to the stage, cellist Benjamin Larsen has forged a reputation as an avid chamber musician in the New York City area. His knack for adventurous programming comes through in his work as Artistic Director of the series, Concerts on the Slope, and in the projects that he spearheads, working with some of today's most notable composers. He actively performs in the Larsen-Choi Duo, which champions new music, original compositions and sonata literature and is a graduate of the Manhattan School of Music.
Posted by St. John's Church, Getty Square at 12:22 PM